Mary Driver
Mary Driver has often been criticized for having too many interests: writing, reading, painting, hiking, running, choral singing, cooking, and a bit of gardening. She is also fascinated by math and science. When stressed, she finds working multi-variable algebra problems to be soothing--they are problems that can be solved. The above mentioned, along with a 7-year sojourn in England and former jobs in business, equestrian arts, and elementary education have provided her with plenty of grist for the writer's mill. 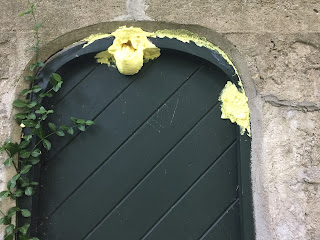 Strange times we're in, but then everyone knows that. Aside from the obvious chaos, corruption and incompetence destroying this country, there are lately weird things happening on a smaller scale, even in my little corner of the world.
I lost the entire month of May to a nasty upper respiratory virus that had me coughing every three or four minutes for weeks. Finally fed up, I went to my doctor. No, wait, my excellent doctor retired last year, so I went to the guy who took over his practice. When I told him I'd been coughing for a month  (fortunately, no other symptoms), he announced I had whooping cough.
WTF?
No, I replied, I've actually had whooping cough, and while this cough was persistent and annoying, it wasn't anything like whooping cough. His response was to declare I needed testing for allergies, which--surprise--he could take care of onsite for an exorbitant fee. I do not have allergies. Double WTF. And don't even get me started on how much I had to pay for this diagnosis.
Since we all know that bad things and weird things come in threes, here are two more examples of the alternate reality of contemporary life.
The other morning as Woki and I were enjoying our morning walk, a couple of cyclists zoomed past, part of their conversation clearly audible: "Have fun, but don't use my name. If you use my name, I will deny this conversation."
WTF?
Spy? Leaker? Government troll? Or just your everyday, run-of-the-mill lawyer? Whatever the guy's profession and motivation, I find it alarming that it is now acceptable to covertly provide information without taking any responsibility or having the courage to stand by a claim. What does this say about our society? To me, such a statement might not raise an eyebrow in Beijing, but it just doesn't sound right on the leafy streets of Lake Forest.
With my imagination in overdrive after hearing that, Woki and I continued our walk, following the same route we take every morning. A mile or so farther along, we strolled past a door set in a concrete wall bordering the property of a large house. We passed this door every day for years, but this time there was a strange yellow mass foaming along its edges, as seen in the photo above.
WTF?
If it was insulation, why would anyone insulate a door in a concrete wall that leads only to woods? Makes no sense. So if it's not insulating foam? Is it a new and lethal fungus? Some alien life form? The egg sacs of sci-fi spiders who will hatch and eat all the dogs and cats in the neighborhood before starting on the humans?  Imagining took hold, and I had to steady myself, calm down and remind myself that sometimes the writer's creativity gets too wild, which is not such a good thing. There is a limit to what is acceptably bizarre.

Hoping to ground myself in reality, I remembered what is going on with our government. WTF, indeed.
Posted by Mary Driver at 6:51 AM